The People Behind the New HIOKI Digital Multimeter DT4261 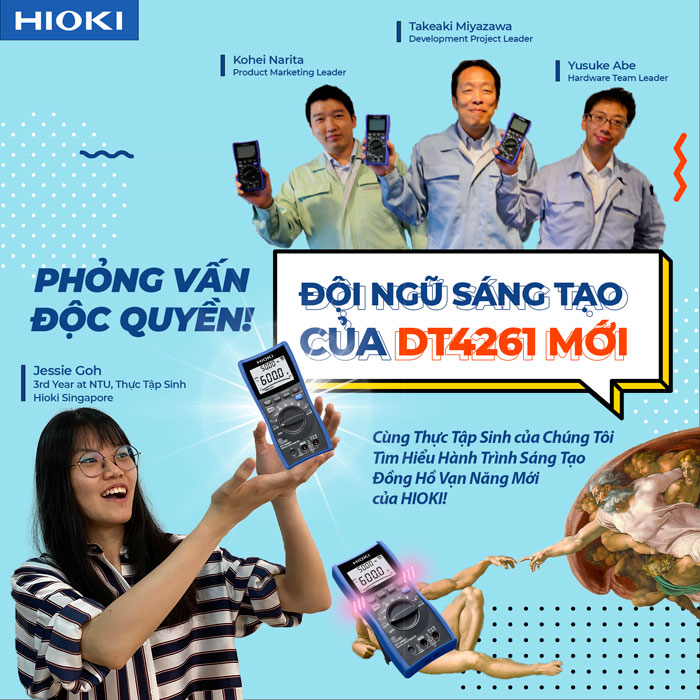 The new HIOKI Digital Multimeter is like no other.

Supporting measurements up to DC 2000V, wireless features, and having the ability to analyse harmonics in the field among other key features – the new HIOKI DT4261 is powerful. Unlike previous models, the DT4261 far exceeds expectations with its multiplied efficiency and superb performance. This is the digital multimeter that sets new standards as the engineer’s new best friend.

All of this is no wonder, as the new digital multimeter is specially handcrafted by our meticulous engineers with the rugged engineer in mind. But even so, the DT4261 is a digital multimeter that appeals to both seasoned and entry engineers. This is a product so good a 3rd year engineering undergraduate (also Hioki’s Intern of 3 months) like myself silently (not so silently) wishes to get my hands on the multimeter for my university lab projects.

The DT4261 has in itself a certain charm that numbers and statistics cannot describe. With that, let us walk through the creation of DT4261, with a rare interview with the people behind this new HIOKI best digital multimeter: DT4261 Development Project Leader Mr. Takeaki Miyazawa, Hardware Team Leader Mr. Yusuke Abe and Product Marketing Team Leader Mr. Kohei Narita from HIOKI E. E. Corporation. These are some highlights of our conversation.

Thank you for agreeing to do this interview with us! Can you share with us more about the reasons behind creating the DT4261 and what were your motivations?

What kind of applications and industry are the P2000 and DT4261 meant for?

What was the project journey like and how did your team go about creating the DT4261?

TM: Firstly, the team decided on the concept of DT4261 and what DT4261 should have. At that point, the most important feature we wanted to have was the wireless capability. Secondly, we had to think on how the DT4261 is to be used by end-users. From that point of view, we decided that the DT4261 must be used on-site and as such, it must not break easily and be designed for ruggedness. With these concepts in mind, we designed the DT4261 for different uses, which help to pinpoint specific features of the DT4261 such as it being waterproof, dustproof and having the shutter safety feature.

YA: The development of DT4261 lasted from February 2019 till now. Apart from what was said earlier, we wanted to hear our customer’s feedback for the DT425X and DT428X multimeters. From our customer’s feedback, we have learnt that the shutter safety function is one of the most wanted features in a multi-meter. However, if the safety shutter function is incorporated, the multi-meter will not be able to conduct open circuit checking due to hardware limitations. To overcome this difficulty, we have included a fuse checking feature, to improve safety and reliability on the new DT4261. In summary, our project journey first started off with deciding on the most important feature, how it is being used by end-users, and listening to customer feedback.

Thank you for sharing more about your project journey. Then, can you share with us some challenges and difficulties faced in creating the DT4261?

YA: One of the biggest challenges faced in the development of DT4261 was meeting the IP54 standards, as it is our first time working with such high definitions of IP54 with our digital multimeters. Especially for the waterproof standards, which entailed the digital multimeter not getting damaged under wet conditions. This proved to be difficult due to input holes on the body required for test probes. To counter this, we made the open body holes water repellent to accommodate waterproofness and the shutterfunctions, as well as changes to the button rubber shape. To achieve waterproofness, we also reviewed the designs of all existing digital multimeter models.

A lot has been done to accommodate all these ideas. Likewise then, what did you enjoy the most about creating the DT4261? Or perhaps any memorable moments you would like to recount?

YA: The creation of the DT4261 was really memorable firstly because we had a lot of younger engineers with us for this project. They have been really enthusiastic and given us a lot of new suggestions and ideas, such as fuse check functions. All of which we did our best to include all of it in the new DT4261. Hopefully this motivates them.

TM: Secondly, as we have reviewed the designs of all existing HIOKI digital multimeters, there are a lot of features we can incorporate. Product evolutions are usually quite simple, but instead this time we decided to do something new by adding many new things. As such, we needed to evaluate deeper which resulted in a rather challenging journey with lots of failures, refinements and problem solving. This made us a little worried that we might not be able to make it to the launch deadline. Fortunately, we were able to make it in time!

That must have been quite the journey! Among all these features, what kind of engineer was the DT4261 created for?

TM: As our team had a lot of highly motivated and younger engineers, we had a lot of ideas for the DT4261. Despite the many challenges, we were able to overcome all of them thanks to their resilience and innovative thinking. Not only that, these engineers were perfectionists as well. An example would be the integrated cap feature on the L9300 Test Probe. How to slide the cap, was also an idea of theirs. These ideas were being thought about very thoroughly, such as whether it was worth it for the end-users. The DT4261 is also very precise and accurate, and would suit engineers who are perfectionists.

TM: For our digital multimeters thus far, we have only focused on hardware design, such as making it tough and durable. We listen to customer’s feedback attentively as well, but it usually is also aspects of hardware. This multimeter is a lot more special, as we have incorporated wireless communicative features that enable users to use onsite, which improves data transfer of site measurements.

“From this, DT4261 is another starting point in HIOKI’s multimeter history, in terms of more efficient data transfer and convenience for users. “ – Mr. Takeaki Miyazawa, HIOKI E. E. Corporation

You have shared a lot about the functions of the DT4261 and since you have brought along the multimeter, will you share with us some design improvements of the DT4261?

YA: There are 3 main design improvements. Firstly, to make the multimeter easier to grab, we have redesigned the DT4261 to have a slimmer and curved body.

Many thanks for sharing so much about the DT4261. Are there any more things you hope to share with everyone?

KN: Last but not least, we would like to talk about the optional P2000 Probe. With the P2000 probe, the DT4261 can measure up to DC 2000 V. This is under CAT III specifications. This is the world’s first multi-meter that can measure up to DC 2000 V CAT III. The P2000 probe will be launched in December. Users will not have any more concern about measurements up to DC 2000 V with the DT4261. We would like all of you to stay tuned for the P2000 Probe launch and we are convinced that you will welcome this combination of P2000 and DT4261.

TM: We believe that the DT4261 can contribute to better data transfer on site with its wireless communication ability. The wireless communication ability allows users to connect the DT4261 to their smartphones and tablets, using the GENNECT Cross application software. DT4261 with GENNECT Cross can display harmonics and waveforms onsite on the user’s mobile or tablet screen, which is efficient and effective for any maintenance engineer who works in the field.

The DT4261 will be released for Pre-Order on 15 October 2021 for Singapore, Malaysia, Vietnam, Thailand, Philippines and Indonesia regions. Click here to Pre-Order.

For more product information, please click on the links below: